Tarantino working on Charles Manson Film, The Tick gets a trailer and Gerard Way’s comic book gets a TV series in Nerdgasm News!

It’s been reported that Quentin Tarantino, the mastermind of Kill Bill 1& 2, Reservoir Dogs, Django Unchained, Inlgorious Bastards and more is working on a film about the Manson murders. Like any standard Tarantino movie he will write and direct the movie and he’s already talking A-list stars he would want to be in it: Brad Pitt, Jennifer Lawrence, Samuel L. Jackson and possibly Margot Robbie to play the role of Sharon Tate, the actress wife of director Roman Polanski who was slain in 1969 in a brutal murder whose savagery shocked the country. No one has read the script yet, but it’s a Tarantino movie so you know you’re in for a bloody good time.

The Tick gets a new trailer

In a world full of serious and inspirational superheroes on tv and movies, it’s nice to see one hero isn’t taking himself too seriously in his new trailer. The Tick, who’s a blue spandex wearing insect man, is getting an Amazon Prime Video reboot (in case you haven’t heard) for a 12 episode, 2 part series. Originally a comic book series then 90’s animated TV show, The Tick parodied and poked a little fun at classic superhero stories and by the looks of the trailer, it’s going to be a goofy knee slapper. The first 6 episodes will air August 25th and you can preview the trailer below.

The Umbrella Academy comic is being turned into a Netflix series 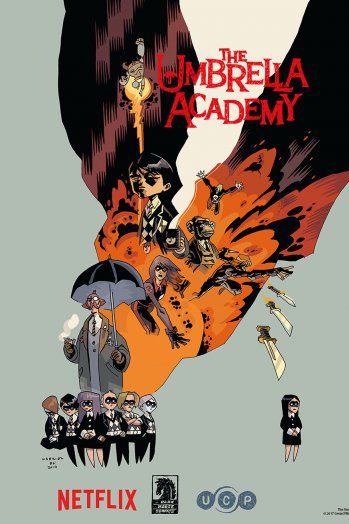 If you’re a die hard My Chemical Romance Fan or just a fan of comic books, you’d know MCR lead singer Gerard Way has a comic book called The Umbrella Academy that’s about to get turned into a Netflix series. If you haven’t read The UA its about a dysfunctional family of superheroes in a world where Kennedy was never assassinated. It’s scheduled for a 10 episode release in 2018.